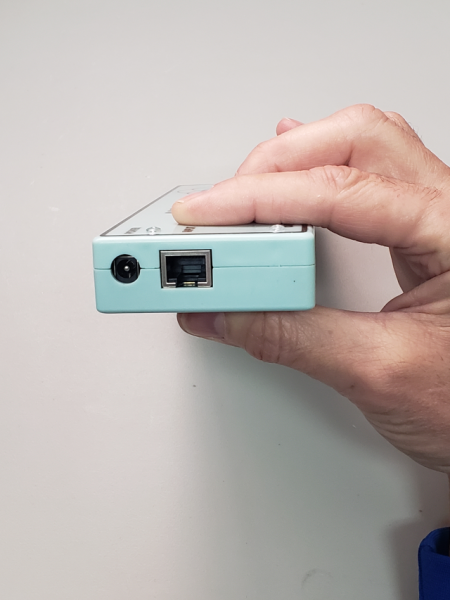 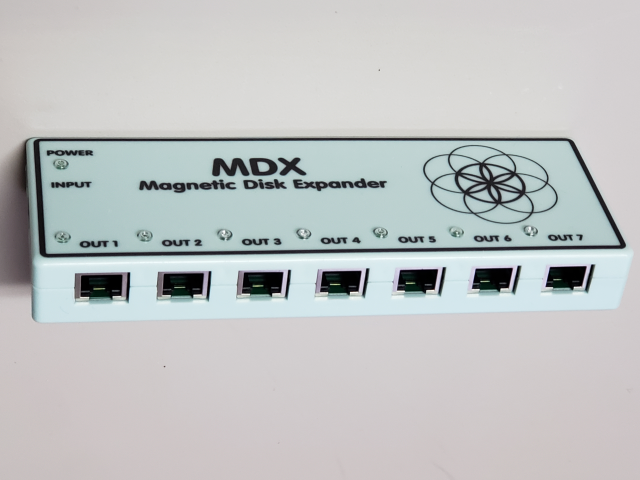 This is the new MDX.  The MDX increases the number of disc outputs, either magnetic or LED, up to seven. The MDX can be used on any of our devices that have a RJ45 jack output. One output from a Wellness PEMF device plugs into the one input Jack on the MDX. The MDX takes that single input and splits it into seven outputs.  The MDX has its own power supply, so there is no loss of power in the split signal.

The seven outputs each create a signal that will run a 7- coil magnetic disc or a 21- light LED disc. This gives the practitioner the ability to run frequency to eight places on the body at the same time. One disc from the original unit and seven more from the MDX.  For example, 6 magnets can be run down the length of the spine and 2 more may be placed on the ankles, giving the entire body the frequency treatment.

Take the furnished double ended RJ45 jack cable and plug one end into any output from your Joint PEMF, EM27, EM272, EM272A, or MR772. Plug the other end of the cable into the Input on the left side of the MDX. Plug one to seven magnetic discs or LED discs into the front side of the MDX. It is not necessary to fill all seven ports to run the MDX.

The MDX must be run plugged into its AC adapter. On the same side as the RJ45 Input Jack, there is a power cord port. Plug in the Power converter plug that was furnished with the MDX. This power cord is a special power cord made for the MDX. Do not use power cords not specifically made for the MDX. Plug the other end into any AC grounded outlet.